The note, which features the image of historic Scottish entrepreneur Kate Cranston, is the bank’s first new £20 in 23 years and the first Scottish note of its denomination to feature a woman other than the Queen on its face.

Designed in partnership with leading Scottish arts’ organisations and designers including Graven Images, Nile, Stucco, Timrous Beasties, O’Street and the Glasgow School of Art, the £20 is the third in a series of ‘Fabric of Nature’ themed notes made from De La Rue’s Safeguard® polymer material and will also contain a variety of new security features, making it difficult to counterfeit but easy to authenticate.

In designing the new notes, Royal Bank of Scotland launched the People’s Money programme and engaged with thousands of people across Scotland through workshops, online communities and polling surveys.

As a result, ‘Fabric of Nature’ was chosen as the theme. The choice of Kate Cranston to feature on the £20 note was taken by the Royal Bank of Scotland Scottish Board.

“Kate Cranston’s legacy touches so many aspects of Scottish life that we, as a nation, are justifiably proud; entrepreneurialism, art, philanthropy and dedication.

“Choosing the design of the £20 note was an important decision for it is Royal Bank of Scotland’s biggest circulating note, with £736m currently in circulation.

“On the eve of International Women’s Day it is fitting that such a figure as Kate Cranston will be celebrated on the face of our most popular note.”

In keeping with the Fabric of Nature theme, the new £20 features illustrations of red squirrels on its reverse and also features the blaeberry fruit. It also includes extracts from 16th century Scottish poet Mark Alexander Boyd’s work, Cupid and Venus. 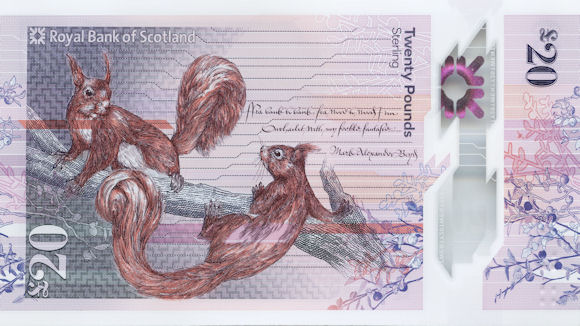 The new note carries the same exclusive weave pattern developed by textile designers Alistair McDade and Elspeth Anderson for the £5 and £10 polymer notes.

The red squirrels on a tree illustration for the £20 follow mackerel in the sea on the £5, to otters on the shore for the £10.

Jeni Lennox of design agency, Nile HQ, coordinated the development of the design.

She said: “The People’s Money project continues to deliver delight with the design release of the third note in the series.

“It celebrates the resurrection of the icon of Scottish design in Mackintosh’s original tearoom, the foresight and ingenuity of the enterprising Kate Cranston and the cheeky indigenous survivor in our Scottish red squirrel.

“Squirrels have rarely been sketched so carefully, hours of work go in to getting the blaeberries just right, the custom designed tweeds are constructed and detailed by our textile designers and in the midst of their renovation of the original tearoom in Glasgow, the team behind the Willow Tearooms Trust scoured the archives to find us quotes and reference portraits.

“The energy and cooperation we meet whenever we engage with anyone on the development of these notes is astonishing.”

Kate Cranston, from Glasgow, made her mark for her series of tearooms across the city.
Her flagship venue at 217 Sauchiehall Street, is celebrated by architects and designers due to the interior designed by Charles Rennie Mackintosh.

The tearooms made a cultural impact during her life due to offering venues where women could enter unchaperoned. Following her death in 1934, her fortune was left to support the poor and the homeless in the city.

Royal Bank of Scotland has been issuing banknotes since 1727 and has an average of £1.5bn worth of notes in circulation on a single day. The £20 note is the bank’s biggest circulating note, with £736m currently in circulation.

As part of the launch, Judy Murray, mother of tennis star Andy, has taken part in a podcast explaining why Kate Cranston’s philanthropy has proved to be an inspiration to her.

Judy Murray said: “The impact Kate Cranston has made to the very fabric of Scotland can’t be underestimated. For years – and rightly so – the world has celebrated her support of the artistic work of Charles Rennie

Mackintosh but personally, it is her philanthropy that has the biggest reach.

“Her approach that good business isn’t just about a balance sheet but the difference it makes to a community feels very modern – but was something she was doing more than 100 years ago. That’s why I’m delighted she is being celebrated by Royal Bank of Scotland on their £20 note.”

The existing £20 paper note features a portrait of Lord Ilay, the first governor of Royal Bank of Scotland. The reverse features an image of Brodick Castle. The date for the withdrawal of the paper note has still to be confirmed.